Saint Josephine Bakhita, was canonized on October 1, 2000. St. Bakhita is a modern African saint recognized as the patron saint of slavery and human trafficking survivors.

Saint Josephine Margaret Bakhita was born around 1969, in the village of Olgossa in the Dafar region of Sudan. Her family history records her to have been born a member of the Daju people, of which her uncle was the tribal chief. Josephine was kidnapped at the age of seven and sold into slavery. She was given the name Bakhita, which means fortunate.

Over the next 12 years Josephine was bought and sold in slavery over a dozen times. During the time of her captivity she was sold so many times, she forgot her original name. As a slave, Josephine was beaten and enslaved for many years. She suffered great torture daily while enslaved and suffered a total of 114 scars from this continued abuse.

Finally In 1883, Josephine was sold to Callisto Legnani, Italian consul in Khartoum, Sedan. Josephine was with him for two years and when he returned to Italy, he agreed to take her with him. While in Italy, she became a babysitter for the family of Augusto Michieli, and she accompanied him to Venice’s Institute of the Catechumens, run by the Canossian Sisters.

While with the Sisters in Venice, Josephine felt drawn to the Catholic Church. It was here that she learned about God. Josephine told the Sisters that she had always known about God, who created all things, and wanted to learn more about him and the Catholic Church. When the Michieli family returned from Sudan, they wanted to take Josephine back with them, but she refused to go. The sisters and the patriarch of Venice intervened on her behalf to allow her to remain with the Canossian Sisters. The judge concluded that since slavery was illegal in Italy, she had actually been free since 1885. 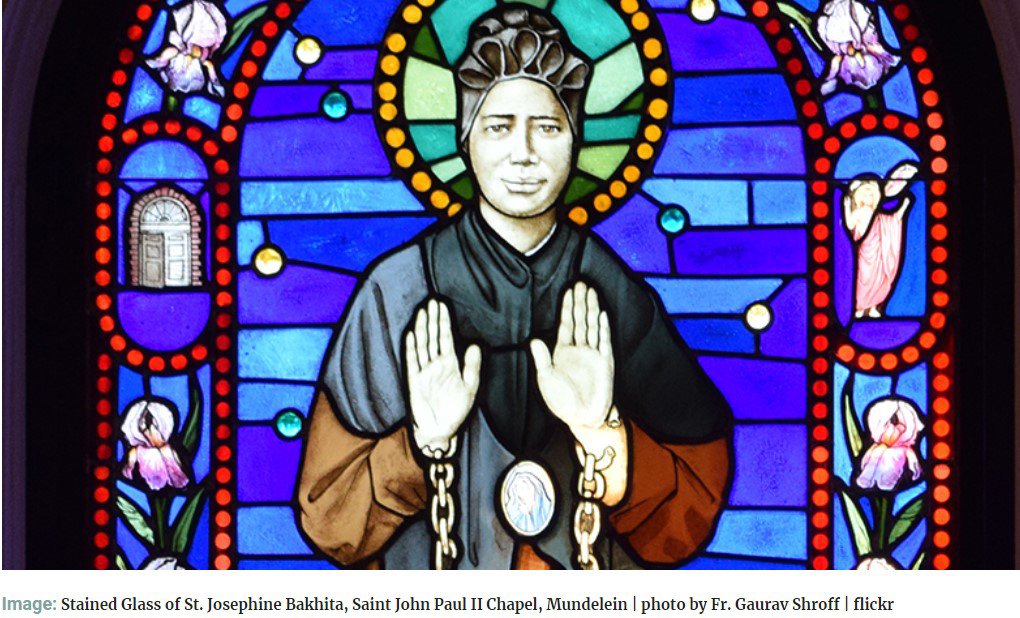 Josephine was baptized on January 9, 1890 and took the name Josephine Margaret Bakhita. On the same day she received the sacraments of her first holy communion and confirmation. She became a novice with the Canossian Daughters of Charity religious order on December 7, 1893 and took her final vows on December 8, 1896.
For the next 42 years of her life, Josephine worked as a cook and a doorkeeper at the convent. She visited other convents telling her story to other sisters and prepared them for work in Africa. When Josephine would speak of her enslavement, she often professed that, “she would thank her kidnappers. For had she not been kidnapped, she might never have come to know Jesus Christ and entered His Church.”

Josephine died on the evening of February 8,1947, and her last words were, “Our Lady, Our Lady!” Josephine was canonized by Pope John Paul II on October 1, 2000. Saint Josephine Bakhita’s feast day is celebrated on February 8th, and she is the patron saint of Sudan, Slavery and Human Trafficking Survivors.