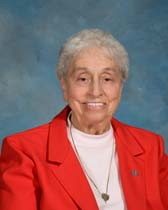 Sister Alice Patrice McGinnis died at Chestnut Hill Hospital on December 27, 2021. Margaret Mary McGinnis was the daughter of Hugh and Annuziata McGinnis and was raised with her two brothers, Huey and Joe, and her two sisters, Rose and Clare. Sister Alice Patrice McGinnis recalled many family gatherings centered around food, fun, and conversation. Influenced by the Sisters at St. Michael’s, she became a Girl Scout in her adolescent years to spend even more time with them. After attending the business school at St. Michael’s, Margaret Mary worked for two years in an insurance office, but she kept in close touch with the Sisters. Prompted by their happy lives and commitment to prayer, Margaret Mary entered the Sisters of Saint Joseph in September 1949. Sister Ann Horan attributed deeply to this decision.

A happy person herself, the young Sister Alice Patrice McGinnis fully engaged herself in her life as a Sister of Saint Joseph and the ministry of education. She began her teaching career on the elementary level, and after 13 years, moved into instructing business math, accounting, and shorthand classes in high school. Educated at Marywood College in Scranton, Alice used her knowledge to benefit the many students she encountered. Her Camelot was Holy Family Academy in Bayonne.  Energized by a rich community life and regular trips to New York to see shows and musicals, Alice boasted that after almost 20 years, she could sing the Holy Family alma mater almost as well as the natives. Her only sad memory from her years in Bayonne was the deaths of her two brothers only two years apart.

Returning to Philadelphia to care for her ailing mother, Alice continued teaching and volunteering at St. Mary’s by the Sea. For 37 years, she could be found serving behind the counters in our venerable St. Mary’s. Alice’s clerical skills eventually lead her to work in the guidance office at Kennedy-Kendrick High School until it closed. Not ready to retire, Alice volunteered at Mercy Suburban Hospital for five years where she, as usual, was ready for “any good work.” As her health declined, Alice made the choice to come to the Villa where she met up with many friends and would get the care she needed. Although many remember Alice as happy and smiling, she did experience “dark days.”

Then she called on her favorite saint, the Blessed Mother, to sustain her through her many losses which included her siblings and her dearest friends in the community. Alice was also inspired by Sister Joan Chittister who wrote, “The gift of years has to do with transformation and gratitude; aging is not a problem but the fear of it is a problem.” This Sister of Saint Joseph never allowed herself to give into this fear. Therefore,  she gave of herself throughout her entire long life, and especially appreciated her time at our Villa, never taking for granted the care and support she received from the staff and the Sisters.

Alice, you used your years well and wisely and brought joy to so many of us. Your transformation is now complete as your join your family and dearest friends in paradise.