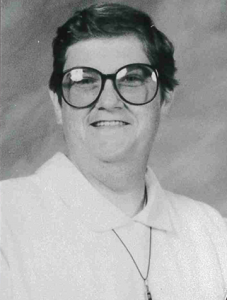 Sister Anne Thomas Taylor died at Temple University Hospital on December 26, 2022, and was buried at Saint Joseph Villa on January 2, 2023. Anne proudly shared that she grew up in the shadow of St. Anne’s Church in Kensington and was the youngest daughter of Thomas and Margaret Taylor. Anne often felt like an “only child” as she grew up since her siblings, Margaret and Joan, were 12 and 10 years older than Anne. As she grew up, her fondest memories were of attending St. Anne’s Parish School and being a member of the school’s glee club. Processing through the convent to get to the church sparked her love of music and ease with the school sisters. When Anne moved on to Hallahan, she continued to deepen her musical talents by joining the school’s orchestra and playing the flute.

Anne lost her father when she was in high school, and right after graduation, went to work to support her mother. After eight years in the work force, Anne began to wonder, “Is this all there is?” As she was faithful to daily Mass, and continued playing guitar and flute for celebrations at St. Anne, she began to realize that her calm and peace came from her prayer. Anne shared her decision to join the congregation with her sisters and her mother who shed tears of joy. Ever the faithful daughter, Anne settled her mother in Regina Nursing Home before heading to Chestnut Hill in 1976.

Anne began her teaching ministry at Holy Cross, Mount Airy. She loved teaching fourth grade, but was especially fulfilled using her musical gifts, playing for school liturgies and teaching classroom music. These students were able to develop their own skills as she moved on to Nativity, Warminster. Anne loved teaching but found herself a bit intimidated when asked to study full time at Chestnut Hill College. However, this proved to be a successful experience as she graduated with a music degree and from there was assigned to West Catholic where she displayed her music talents by working with the orchestra and band. After nine successful years at West, Anne headed south. She described her almost 25 years at Bishop McGuinness High School as “pure joy.” Here too, Anne thrived through her music. She would choose a song the students liked, and taught it in parts, and watched them delight in their own mastery. Using her gift of music coupled with her sense of humor, Anne established a rapport with both the students and the faculty of Bishop McGuinness,

Sadly, Anne’s health forced her to leave her beloved south in 2019. Her memory is still so strong among the members of that community causing some to travel to Philadelphia to attend her funeral. With help of her family, Anne developed her own “bucket list” and had her dream come true by visiting Disney World, with some of her nieces. Anne now fills the halls of heaven and joins the choir of angels singing  before the One who is the source of all love and harmony. Thank you, Anne, for your faithful witness as a Sister of Saint Joseph for over 46 years.