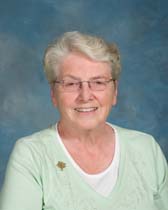 Sister Catherine M. Larkin died at Saint Joseph Villa on September 15, 2022. In her own words, Catherine speaks of a few memorable events in her life. Included in these are her entrance day, September 8, 1954. This signified a real separation for her first from her parents and next from her twin sister, Ann. Although these two women chose different careers,  they were never far apart. While Catherine entered the Congregation, Ann married a few years later, and she became a mother and a homemaker. Then came another turn in the road, where Ann became a teacher and Catherine, a nurse as she cared for their mother.

Sister Catherine M. Larkin was the start of her fourteen missions and Catherine admitted “bouncing” from one mission to another every two or three years. During these times, Catherine had two memorable events: graduation from St. Charles Seminary and her two-week trip to Ireland. The first water shed moment was enhanced by the sisters in Catherine’s local community who provided a grand celebration for her entire family. Likewise, the Ireland trip was coordinated by one of Catherine’s faculty members from Cardinal O’Hara High School. This was her first real trip and remained a golden emerald in her life.

Although Sister Catherine M. Larkin valued teaching at the high school level at both O’Hara and Kenrick, her most satisfying assignment was the four years spent as CNA at the Villa. While teaching at Kenrick, Catherine was needed to care for her mother. When her mother died at the Villa, the Community called and asked if she would want to work permanently in Flourtown. Catherine willingly agreed. Her final assignment was back in the Novitiate building in the Development Program, and as she observed she had come “full circle.” Catherine’s story will continue to be told in the halls of Joseph and Paradise.