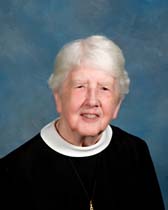 Sister Constance Ward was born in Philadelphia.  In her early years the family belonged to Saint Helena Parish, but later moved to Saint Benedict Parish.  Constance attended Saint Athanasius Grade School and graduated from Little Flower High School in Philadelphia.  She entered the Sisters of Saint Joseph in Chestnut Hill a year after graduating from Little Flower.  When she received the habit on April 3, 1945 she received the religious name Sister Charles Catherine honoring her mother Kathryn and her father Charles.

In pursuing her education Constance received her Bachelor of Music degree from Chestnut Hill College.  Her teaching ministry began at Ascension School in Philadelphia; she also taught in other schools in the Philadelphia Archdiocese:  Holy Cross, Resurrection, and Stella Maris, as well as Blessed Sacrament in Newark, New Jersey.  Constance’s study of music came to be shared after she had been teaching for twenty years.  In the early 1970’s Constance was assigned as an itinerant music teacher at Saint Anthony, Ambler and she travelled to nearby schools to offer music education.

It was noted that Constance “had a great love for the Archdiocese of Washington. . . and she will be remembered as a woman of great faith and devotion and love of the Church.”

In 2012 Constance moved back to Philadelphia and lived at the Motherhouse as a member of the Trinity Community.  In 2015 she moved to Saint Joseph Villa and continued her mission of prayer and presence to those far and near.

May she now enjoy the glorious choirs of angels and may Alleluias be her song as she enjoys eternal life with our God.