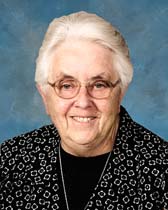 Sister Marie Elizabeth Alspaugh died on November 23, 2021.  Her funeral was held on April 25, 2022. Baptized Katherine Helen, she was the middle child of six, born to Howard and Henrietta Alspaugh.  Her grandmother, whose favorite she claimed to be, gave her the name, “my sweet little pie”.  Her siblings shortened this to PIE, a term they used affectionately for her in her childhood.

Marie’s ancestry included a strong religious underpinning; her dad, Howard was a Methodist, whose great grandfather was a circuit preacher, having founded numerous Methodist churches in North Carolina. Her mom was a devout German Catholic.  Her sister was a Franciscan nun and her youngest brother, Paul, spent his entire priesthood ministering to the deaf community.

In North Carolina, however, when Marie was growing up in the 40’s and 50’s, the presence of catholic nuns and priests was not the norm.  So, in the 40’s when the SSJ’s arrived, Marie’s mom was delighted, and she made sure that when the family drove to mass on Sunday, they had a good supply of fresh vegetables to give to the sisters.  When Marie was able to drive, she quite willingly was their chauffeur -as-needed because the sisters did not have licenses and, of course, no car. During these car rides, conversations and a lot of laughter with Mother Marie Gervase and Sister St. Hubert sowed the seeds of her vocation.

Marie’s first mission as an SSJ was to teach at St. Bernard School in Philadelphia. When she walked into the 4th grade, it was her first experience in a catholic school.  Actually, her two years at St. Bernard were her only experience teaching in Philadelphia. There were short times teaching in New Jersey and Maryland, but longer stays in North Carolina and in Virginia before she moved to her beloved Mississippi.  She wrote “I especially loved my years in Chape Hill (N.C.), a wonderful university town, but Greenville, MS…so different in every way…stole my heart.”

Marie has been described by those who knew her well as “tender and tough”. Those juxtaposed words were well chosen; she was an in- charge woman who was humble and aware of her powerlessness; under a stern exterior lived a sentimental and soft soul.  And so she was loved and appreciated by many who shared her life.

In her eulogy of Sister Marie Elizabeth, Sister Karen Dietrich cited two instances in which this love and appreciation were very much apparent.  The first happened in 1985, as she left her tenure as principal of St. Thomas More School in Chapel Hill.  She had managed to increase the student population from 140 students to over 350; she involved parents more fully, doubled grades and added an 11,000 foot expansion to the school. The pastor said,” Sister has a special gift …for assessing needs and seeking remedies, but it’s her sensitive interpersonal skills that have captured our hearts.”

A second instance occurred in 2004, when Marie was given the Angel Among Us award given by the city of Greenville and Our Lady of Lourdes School where she was principal while ministering to the children of the Delta in Greenville, MS. Her letter of nomination said, “Her dedication is experienced in her quiet, gentle and patient presence.  She is a true model of one who teaches as Jesus did.”

Practicality in looking to the future was part of the equation in her success. In 1995, Sister Marie Elizabeth Alspaugh was featured in Today’s Catholic Teacher for bringing computers into the classroom in her school.  Cotton farmers were using computers for tracking inventory and expenses and for connecting them technologically to the rest of the world. In her own life after she retired, her iPad and Facetime were lifelines.

Sister Marie Elizabeth was born, bred and was ever, a woman of the South.  Until the end, in her room there was a stalk with cotton coming out of the pod. She was tender and tough, took charge and lovingly served her God. Someone close by said that on the morning she died she said, “I’m ready. Take me now.”

We are grateful for Sister Marie’s 65 years of presence in our lives, of her example of faithfully using her gifts and talents, “to live and work that all people may be united with God and with one another.”

Be at peace with the God you loved and served; remember us .