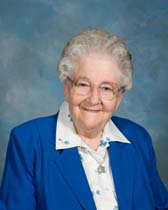 Sister Marie Fatima Kretschman died at Saint Joseph Villa on September 3, 2022.  Anna Helen Mary Kretschman was born July 26, 1926, to parents Philip Joseph and Edna May Lamont, parishioners of Saint Helena Parish in the Olney section of Philadelphia.  Anna and her brother Philip were among the first students to be educated in the newly con- structed Thomas K. Finletter Public School, a building added to the National Register of Historic Places. The Kretschman children attended Olney High School.

During World War II Anna served in the United States Navy for two years. She was honored at her gravesite by two naval officers who presented her family with the folded American flag.

Having nurtured a great devotion to our Blessed Mother she seriously considered religious life.  She leaned toward the Sisters of the Immaculate Heart of Mary but was inadvertently directed to the Sisters of Saint Joseph whom she visited at Saint Gabriel Convent in Norwood, Pennsylvania.  On September 14, 1950, Anna entered the Congregation.  On March 27, 1951, she received the habit and the religious name Sister Marie Fatima and on August 8,1958 our Fatima made her Final Vows.

Sister Marie Fatima was a kind and successful teacher for many years.  She touched the lives of children from grade school to high school and taught piano and choir. She served in leadership and administrative positions.  To have known her was to have experienced the innate love she cherished for the God of her heart.  One cannot think of Sister Marie Fatima Kretschman without remembering her sweet, loving smile.

Our Constitutions state: As far as possible we imitate Jesus in his untiring zeal and healing presence; Mary in her living faith and constant fidelity to grace; Joseph in the loving manner of his service and his cordial charity to all. – 10   Sister Marie Fatima was an exemplary reflection of this courageous action.  She now enjoys what God has prepared for her for almost one hundred years, an eternity with the God of her heart.