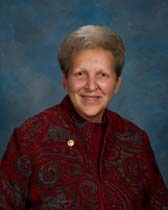 Sister Mary Elizabeth Guyer was born and raised in York, Pennsylvania.  Her family owned a small farm in “the county” and were members of Saint Rose of Lima Parish in York.  Mary attended grade school in the parish school and then attended York Catholic High School.  It was during her school years that Mary met the Sisters of Saint Joseph.  A year after graduation Mary entered the Sisters of Saint Joseph at Chestnut Hill, Philadelphia.  After her initial formation Mary received the religious habit and the name Sister Margaret Eugenie.  She graduated from Chestnut Hill College and received her Masters degree from Villanova University .

Mary’s forty plus years in educational ministry brought her to the archdioceses of Philadelphia and Newark as well as the dioceses of Harrisburg and Trenton.  She served as teacher and principal in a variety of schools—some close to home and others in neighboring states, some in the city and others in suburban areas.  She shared many happy memories with her dear friend Sister Ann Maureen who died in 2016.  Mary enjoyed travelling, putting puzzles together, fishing and identifying unusual bird calls.  She spoke with affection of her “extended family.”

In 2005 Mary began her volunteer ministry.  For nine years she was kitchen manager and cook for Saint Andrew Senior House in Bayonne.  She then moved to Saint Denis in Manasquan and volunteered in the parish Religious Education Office.  Parishioners remember her with fondness and appreciated her presence at “the Beach Chapel Mass.”

Sister Mary’s death was unexpected, but so appropriate that she would spend her favorite feast—Christmas—in her new home for eternal life.  Rest in peace, Mary.