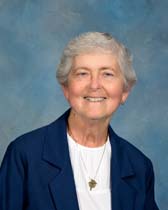 Sister Sheila Ann Falls died at Chestnut Hill Hospital on January 14, 2022. She was born August 21, 1938, to parents James C. Falls and Mary Forde. She was the eldest of sister Tricia and brother Jimmy. The family’s parish was Saint Athanasius. The Falls children attended the former Saint Therese of the Child Jesus School, Mount Airy, where Sister Sheila Ann Falls first met the Sisters of Saint Joseph. She attended Little Flower High School for Girls where she encountered others seeking to live and work so that all people may be united with God and with one another. Constitutions 16. Cherished friendships perdured from those initial relationships. Sheila worked for a year after high school and entered the Congregation in 1957. On the Day of Reception she received the habit and the name Sister James Patrice.

Initially Sister taught grade school. In 1970 she embarked on a high school career and soon earned a master’s degree in Spanish from Millersville University, an achievement that significantly impacted her compassion and resulted in her selfless ministry for the poor.

Over many years she undertook several pastoral and social services in the Philadelphia Archdiocese. Numerous accounts attest to her genuine attention and care for those who were underprivileged and suffering, especially Latinos.

A loving, compassionate woman, Sister Sheila Ann Falls embraced opportunities “to serving others particularly our immigrant community with kindness, respect and love” – from the Sister Sheila Falls Scholarship at Little Flower High School. Sister relished the summers of 2005-2019 which she spent at Villa El Salvador in Peru. Here she saw “so much poverty, sickness and sadness, yet such hope-filled people. The love of the people for God and for one another are beautiful to experience. I planned a time of service but I was the recipient of service.” Love and com-passion were innate to our Sister Sheila, who tireless in her ministry, promoted the mission of the Congregation by responding creatively and generously to the developing needs of people, to see what miseries exist . . . and to remedy them in collaboration with others. Constitutions -26

Those who shared community with Sheila attested to her determination to solicit ways to respond to the needs of those she served. In addition, sisters received her caring, loving companionship. To meet her was to be greeted by a warm, welcoming smile. During her

few months as a resident at Saint Joseph Villa, therapists noted how “other-centered” she was.

Our vision and efforts in living community should always extend beyond ourselves to all of God’s people. Personally and corporately, we give witness to our consecration by the love we have for one another and by our spirit of joyful service and welcoming hospitality. Constitutions 52

What must surely have been the “welcoming smile” of the Spouse of her heart Whom Sheila served throughout her life? We praise and thank our God for her life well-lived through extraordinary service to His people and well-loved for all eternity in His loving embrace.