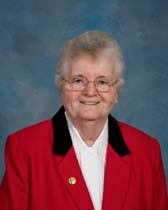 Sister Theresa O’Donnell, daughter of John and Bridget O’Donnell, both of Ireland, was born on December 7, 1935.  She was number nine of their ten children. She joined her siblings Rose, Patrick, Marjorie, Anna, Anthony, Mary, Bridget, Michael and John at Saint Andrew School in Bayonne and then with her sisters headed to Holy Family Academy in Bayonne.  Her mother would tell the older ones to “take care of Tess.”  She learned to tolerate their “bossing her around,” and she also appreciated that their generosity kept her among the “well-dressed” through the years.

Tess used to say there was no school that could compete with HFA, and after graduating she entered the Sisters of Saint Joseph in 1954 along with several classmates.  The following year she received the religious habit and the religious name Sister Joseph Maureen.

In 1957 the young Sister Joseph Maureen began her ministry in education.  Her first mission was Visitation School in Philadelphia.  After teaching for ten years in several elementary schools in Philadelphia and Baltimore she pursued her master’s degree in Business Education at Marywood College, Scranton, Pennsylvania.

In 1968 Tess was assigned to teach Business in high school.  This became her ministry for the next twenty years bringing her to the archdioceses of Philadelphia, Newark and Baltimore.  As head of the Business Department at Cardinal Dougherty High School in Philadelphia, Sister Theresa was well-loved by students and faculty alike who appreciated her understanding manner and collaborative way of delegating responsibilities to colleagues.

Tess had many friends in the community.  For years she and a group of friends would gather for a week’s vacation in Ocean City, New Jersey.  Playing 500 Rummy was a favorite pastime, and most of the time Tess would win and the others were left to count all their cards.  Tess would listen to their counting and her laughter would fill the room.  She shared her pleasant disposition and readiness to laugh with all.  She used to watch EWTN, telling her friends she was “trying to get holy.”  She was especially committed to her vow of poverty, living simply and regularly sharing her monthly budget with those in need.  Tess also enjoyed reading and Irish music.  She could swing around like a real step dancer.

Tess was gifted with abundant love and shared it with everyone.  She lived her vowed life in Community as a faithful servant.  She continued this way of living as she entered Saint Joseph Villa, and she appreciated the excellent care she received.  She spoke highly of the staff, the nurses and the amenities bestowed upon her and other residents.  Tess faced serious health issues in recent years, but she trusted that God knew what was best for her.  Despite all she faced, she lived a love that was never uprooted because she knew to whom she belonged.  Tess died peacefully and now rests at peace in the arms of God surrounded by her family and friends and perhaps enjoying some Irish music.