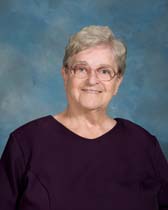 Sister Veronica A. Kaiser died on March 19,2002. The liturgy of the resurrection was celebrated for her in the chapel at Saint Joseph Villa on March 31. Following the liturgy, she was interred, in the congregational cemetery adjoining Saint Joseph Villa.

Sister Veronica A. Kaiser was the youngest of five children born to Mary and William Kaiser. The family lived in Delaware County before moving to Philadelphia, in the area of Ascension Parish.  She and her siblings attended the parish school. She later attended Little Flower High School, graduating in 1943.

Veronica’s longest and very successful ministry was in the field of education. She began teaching at Our Lady Victory School in Philadelphia and from there she taught in Baltimore, Bethlehem, McSherrystown, North Arlington, and Charlotte, NC.  She returned to Philadelphia in 1978, teaching at Epiphany and then at Stella Maris, where she served as principal. Her teaching experience spanned 34 years; she taught every grade level, but 5th grade.

Her ministry in the classroom came to an end, but not her ministry to people. Her work shifted to the business and social aspects of education.  She served as social minister, secretary, switchboard operator, wherever and whenever her skills could be useful.

In 2010, Ron came to the Villa and continued to live her life to the fullest, and she did appreciate life. One of her favorite sayings was, “If you’re happy and you know it, clap your hands”. She had an unusual sense of humor and a hearty laugh, and everyone nearby knew when she was laughing. What she did not do was boast about her accomplishments. She believed that we must see the humanness and humor in all of life’s circumstances and accomplishments. Like her patron, Saint. Joseph, to whom she was devoted, it was enough that God knew.

Sister Owen Bonner, in her eulogy, described Sister Veronica well.  Maxim 50 states,” Prefer always the will and contentment of others to your own will and contentment and do so with a happy and joyful heart”. What better way to describe Sister Veronica A. Kaiser.  Thank you, Ron, for your faithfulness – for your witness and for your humor. If you’re happy and you know it, clap your hands!   Rest in peace!